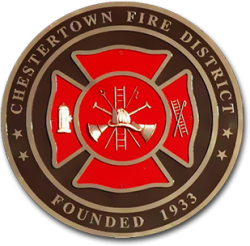 A resolution to establish a fire district in the Town of Chester was presented before the Warren County Board of Supervisors on February 5, 1933.  It was adopted on February 16 that same year. The actual Chestertown Fire Company was organized on October 11, 1933.

In June, 1932, a serious fire threatened several buildings within the village and some 100 or more citizens gathered at the Odd Fellows Hall on Theirot Ave (now the offices of Monroe and Parker). To discuss the question or organizing a fire district and fire company.

Two committees were appointed, one was to interview residents of the proposed district and obtain their sentiment and the other committee’s function was to communicate with manufacturer’s of fire fighting equipment to determine the cost of efficient pumpers and other apparatus.

At a meeting of the Chester Town board on Aug. 31, 1933, the appointment of the first commissioners was done.  They were Dr. Howard B. Swan, Walter W. Janser and William Murphy with Ralph Barkley, secretary. Dr. Swan was also the official founder of the fire company and the designation was officially commemorated on Memorial Day, 1946, when a plaque of the bronze was unveiled and mounted on the firehouse exterior.

A total of 22 men served in the first year of the fire company’s existence.  Neil O’Connell was elected chief, Roy Boles, secretary; and Roy Gibb, treasurer.  Clarence Armstrong was assistant chief; Donald MacNeill, chief pumperman, and Mark Fish, historian.  On Dec. 27th, the fire company voted to start the erection of a firehouse and a lot was purchased from Willis Kingsley on West St.  The building committee appointed was comprised of Neil O’Connell, Harold Middleton, Dr. Swan, John Kingsley and Mark Fish.

Members of the company signed a $3,000 note to insure their share in the cost of the building and on Dec. 28th, John Kingsley drew plans for the firehouse for the building committee.  On Jan. 2, 1934, the work started on the firehouse.

Later in January, the company purchased a pumper with a 200 gallon pump.  It carried 88 feet of hose, a 150 gallon booster tank and was equipped with ladders, axes, pails and all other necessary fire fighting equipment.

The fire company had its first real run to a serious fire on Feb. 26, 1934.  The home of William Clarkson, situated on the White Schoolhouse Rd. was ignited from a blow torch being used to thaw out frozen water pipes.

A second pumper was purchased in 1934.  This pumper had a 750 gallon pump, 150 gallon booster tank and carried 1,700 of hose.  Following the purchase of this pumper, the fire company progressed rapidly.

In the summer of 1934, the fire company held its first annual ball in the Odd Fellow Hall.  About 200 persons attended the dance. Music was furnished by Foley’s Orchestra of Ticonderoga and the affair was termed both a social and financial success.

Furniture for the new firehouse was purchased in October, 1934.  This furniture arrived on November 23rd and the fire house was opened for public inspection.  Over 80 people visited the firehouse. In December, a dedication banquet was held at the firehouse and the volunteer fire company was at last firmly established and equipped.

During the years since the company was founded, the men have been called out to fight many fires.  The have rescued burning automobiles, fought fire which were caused by rats gnawing on matches, and given emergency treatment to many drowning victims.

In spite of all their many other duties, in 1939, the local foremen organized a Memorial Day parade with the cooperation of the high school band, the American Legion and other organizations.  When this event was organized by the company, there had not been any type of Memorial Day ceremonies in 15 years.

Early in 1941, the emergency squad of the Chestertown Volunteer Fire Company donated blood for the blood bank being build up by the Warren County to donate blood.

The Emergency Squad has been active since 1938.  The squad donated blood, worked in rescue parties for drowning victims and transported emergency cases to nearby hospitals.  Not until 1948 was the squad able to purchase a car for emergency use. Finally a car was bought which could be used for two stretcher cases or called in to service for 12 passengers in addition to the driver.

Both the emergency squad and the fire company have grown through the ensuing years and several additions have been made to the firehouse to accommodate the expanding line of equipment.  Thousand of volunteer hours have been given by many men, too numerous to list here, to which the community owes a great debt of gratitude for many lives have been saved and fire damage minimized.